⚒ The story of the great Ferrokesterites from the San Jose Mine, Oruro Department, Bolivia ⚒ 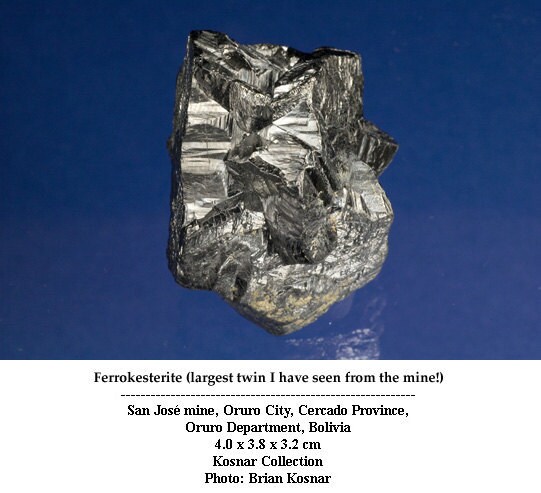 At the end of 2004, a momentous discovery of Andorite (more properly Andorite IV) was made at the famous San Jose Mine in Oruro, Bolivia. I was in La Paz a few days after the first major specimens came out of the mine, and I rushed down to see my main source for the material. His house (which had no electricity, and only wooden paneled floors covered with dirt) was filled with extraordinary specimens of a species that I had only seen in a few instances in fine specimens from Bolivia. Andorite is easy to recognize, but wonderful crystals are simply awe-inspiring. The largest individual specimen measured ten by seven inches, and hosted at least a dozen crystals up to three inches long, with virtually no damage. By far the world's largest and arguably finest Andorite specimen. For reference, the single largest crystal from this find was just over six inches. Smaller specimens were equally impressive, especially since many of them were associated with desirable "needle"-like crystals of grey, prismatic Zinkenite and rested upon bright golden metallic Pyrite matrix.

For an added touch, a handful of specimens were associated with interpenetrant twins of a copper iron zinc tin sulfide, which I immediately recognized as Stannite. I had seen these crystals in the past from San Jose, and due to my extensive experience with the material, I thought nothing more of them. On the other side of the world, at nearly the same exact time, the Yaogangxian Mine in the Hunan Province of China was producing arguably the world's finest specimens of Stannite, and they were far superior to the Stannites that I had acquired from San Jose, making mine very difficult to sell to collectors. I was actually only able to sell a handful of pieces, one being to my good friend and thumbnail collector Tom Gressman (the current editor of the Mineralogical Record). The piece consisted of a couple of the aforementioned interpenetrant twins of Stannite with minor "needles" of Zinkenite. Tom ended up selling the piece to Wendell Wilson around 2011, who told me that he bought it simply because he never had a Stannite in his thumbnail collection before.

For whatever unknown reason, after a certain period of time, Wendell felt that the habit of the crystals was somewhat unusual, and decided to further investigate them. He took the specimen to Bob Downs and the University of Arizona, who was intrigued and thought they could be a different species from Stannite. Due to his expert knowledge in the area of sulfides and sulfosalts, Bob decided to analyze the piece to determine its true nature. I was contacted by Bob about his research and was asked to supply a crude specimen for the RRUFF project for analysis (see the piece at this link:  https://rruff.info/ferrokesterite/source/asc/R110173/) I gladly obliged since the prospect of these specimens being another species was more than enough to give up a rock. As luck would have it, the sample turned out to be an incredibly fine specimen of the notably rare dimorph of Stannite, Ferrokesterite! And as luck would further shine down on me, I still had nearly an entire flat of them that I put on a shelf thinking they were Stannites that nobody wanted.

I now had nearly the entire world's supply of confirmed Ferrokesterites, and decided to prepare them to bring to the Tucson show in 2013. I had about a dozen specimens including my favorite piece which was a unique near "floater" specimen that showed a highly desirable "four-fold" or "four-way" penetration, which was formed as the result of three tetragonal scalenohedra that grew in such a perfect 60 degree angle from one another that one crystal played host to the other two in a way that four small "teeth" could be seen poking out of the broad face of the main/third crystal. My favorite matrix specimen in the lot featured a 1+ cm twin of Ferrokesterite that was aesthetically perched atop a mound of crystallized metallic Pyrite with a beautiful "spray" of Zinkenite flaring of the upper/rear edge of the piece. Both of these pieces were sold on the opening day (Friday, February 8th) of the Westward Look Show, 2013.

These specimens are among my favorite pieces that I have ever brought back home from nearly 15 years of travelling to Bolivia, even if it did take eight years and a little help to properly identify them!

The specimen pictued here is the only piece I kept from the find. It is the single largest Ferrokesterite in the world do date, and one of my favorite pieces in my collection.

View these and other specimens on our website: www.minclassics.com

or in our Etsy store: https://www.etsy.com/shop/MineralClassics