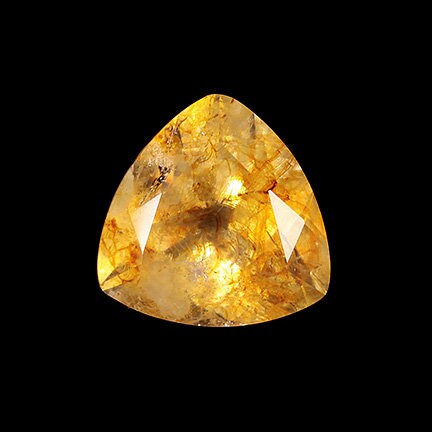 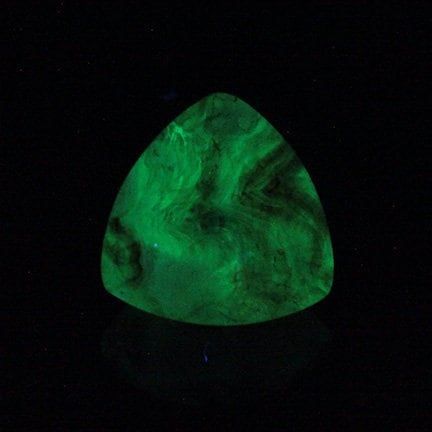 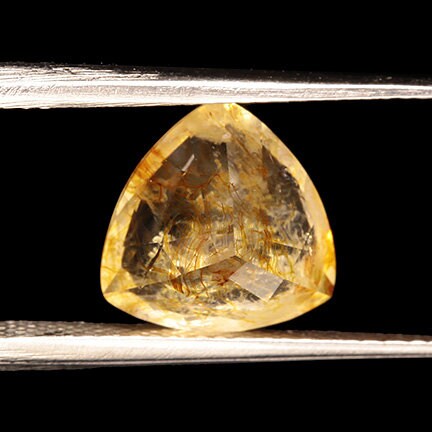 This "Trillion Brilliant" cut Hyalite Opal gem is translucent with a golden to colorless interior, but the most important aspect of the piece is the fact that it shows tiny reddish-orange capillary-like inclusions of iron oxide just below the surface, which has given this material the nickname "Blood Vessel Opal". If you look closely you can see the tiny fibrous inclusions that have an almost organic appearance. This is truly unique and interesting Opal and we've never seen anything like it. We're proud to be the first ones to bring it to the public. One of the great aspects of the material is that unlike a lot of Mexican Opal, and Opal in general for that matter, this particular Opal is incredibly durable and strong, and doesn't fall apart, crumble or chip when cut and / or polished. This is significant because these gems will make great centerpieces for jewelry! Lastly, like most Hyalite specimens, this piece shows a brilliant green fluorescence under SW UV light as you can see in the second photo. It's not often that we see such richly colored Hyalite, and considering it's from a new and very limited discovery, it's a great opportunity to purchase something that nobody else has right now. Also, Opal is one of the options for October birthstone so don't miss out on this opportunity to purchase a beautiful and rare gem for a special birthday gift!

This is one of the few gemstones of this material that we know of. We had this stone cut from a very small parcel of rough that was deemed worthy for faceting. We hope to have more in the future, but the nature of the material does not allow for a lot of faceted stones. This gem came from rough that was discovered in the beginning of 2016 by a friend of ours who is working a claim with a few of the locals for this fine quality Opal. It's very exciting to see pieces of this quality coming out of the ground, as most of the Opal from this area is not nearly as attractive or fine quality as this piece. Don't miss out on this beautiful and rare gem of this well-known Opal variety. For years this material was referred to as Hyalite Opal, but is now listed as a variety of Opal called Opal-AN. This material is specifically an amorphous (often colorless) form of Opal that is found in spherical aggregates, which are often intergrown or stacked with a bead-like appearance. The listing on mindat.org states that "The 'A' in the name stands for amorphous; the subscript 'N' is to imply its structure is network-like similar to silica glass; however, it still contains about 3-8% water."